In 2020, Falcon commenced a sponsorship agreement with middleweight professional boxer, Mark Heffron, contributing towards the costs of his training camps throughout his boxing journey.

We are pleased to announce that his next fight will take place in London, on the 16th of July 2022 against Lennox Clarke, where he will be fighting for the British Title along with the IBF Inter-Continental and Commonwealth (British Empire) belts.

Heffron won his last fight on the 19th of March against Tomas Bezvoda, by a technical knockout. It was an intense and exciting match to watch, and we are sure his next fight will be the same! Also known as the ‘Kid Dynamite’, and following his impressive 27 wins out of 30, we are sure he will take the victory against Clarke this time round.

Starting professional boxing when he was only 18 years old and making his debut in 2010, Heffron has come a long way to becoming a highly-skilled and renowned boxer, performing for 11 years.

The team at Falcon Trunking are extremely proud of Mark and his endeavors & the opportunity to be able to sponsor him. Over the past few years, we have been supporting Mark through his boxing career, and we are excited to see the outcome of his upcoming fight in July where hopefully he can add ‘British Title Holder’ to his already impressive CV. It will be a fight you do not want to miss! 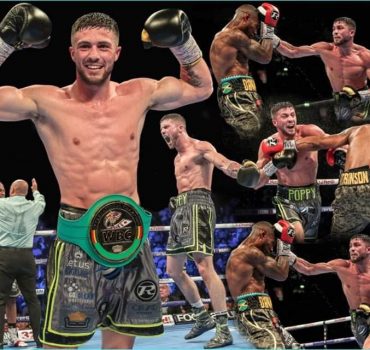 We use cookies on our website to give you the most relevant experience by remembering your preferences and repeat visits. By clicking “Accept All”, you consent to the use of ALL the cookies. However, you may visit "Cookie Settings" to provide a controlled consent.
Cookie SettingsAccept All
Manage consent

This website uses cookies to improve your experience while you navigate through the website. Out of these, the cookies that are categorized as necessary are stored on your browser as they are essential for the working of basic functionalities of the website. We also use third-party cookies that help us analyze and understand how you use this website. These cookies will be stored in your browser only with your consent. You also have the option to opt-out of these cookies. But opting out of some of these cookies may affect your browsing experience.
Necessary Always Enabled
Necessary cookies are absolutely essential for the website to function properly. These cookies ensure basic functionalities and security features of the website, anonymously.
Functional
Functional cookies help to perform certain functionalities like sharing the content of the website on social media platforms, collect feedbacks, and other third-party features.
Performance
Performance cookies are used to understand and analyze the key performance indexes of the website which helps in delivering a better user experience for the visitors.
Analytics
Analytical cookies are used to understand how visitors interact with the website. These cookies help provide information on metrics the number of visitors, bounce rate, traffic source, etc.
Advertisement
Advertisement cookies are used to provide visitors with relevant ads and marketing campaigns. These cookies track visitors across websites and collect information to provide customized ads.
Others
Other uncategorized cookies are those that are being analyzed and have not been classified into a category as yet.
SAVE & ACCEPT
MENU